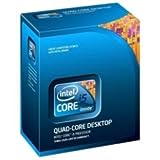 For the first time, there is a smart family of processors that can provide extra performance when you need it, and increased energy efficiency when you don’t. Intel Core i5 650 Processor 3.20 GHz with 4 MB L3 shared cache. Features Intel Turbo Boost Technology which accelerates your performance to match your workload. Intel Hyper-Threading Technology (dual-core with 4 threads), NEW with Intel HD Graphics at 733 MHz, LGA1156 package. Intel HD Graphics supported when used with DH55TC, DH55HC or similar motherboards. Included in box: processor, fan/heatsink, manual and chassis sticker. 3 Year Limited Warranty. Intel Turbo Boost Technology- automatically speeds up your processor when you need it. So even if you’re running multiple applications at the same time, turbo boost taps any unused power to give you an extra boost of speed. Like a modern sports car, where the car can deliver power and traction to the wheels where they’re needed, Intel Turbo Boost Technology automatically speeds up the processor when the PC needs extra performance. Intel Hyper-Threading Technology – lets your processor do two things at the same time, similar to a toaster that has two slots instead of one, or four slots instead of two. The result is that you can do a lot more in less time. Intel HD Graphics- provides superb visual performance for sharper images, richer color and lifelike video. Now available on select models of the all NEW 2010 Intel Core Processor Family.The Intel Core i5-650 Processor brings great performance, Intel HD Graphics, and the latest Intel technologies to your desktop computer. With two cores running at 3.2 GHz, the Core i5-650 won’t have any problems handling your everyday applications. And when you need an extra burst of speed, the processor can utilize Intel Turbo Boost Technology to run at up to 3.46 GHz.

Multiple Cores for Speedy, Multi-Threaded Performance
The Intel Core i5-650 contains two processors, or execution cores, on one integrated circuit. Combined with four threads, the Core i5-650 can simultaneously work on multiple tasks. This design produces faster and more efficient results, so your computer won’t slow down–no matter how many applications you have open.

Advanced Technology to Keep Your Computer Secure
The Intel Core i5-650 has security features that make it ideal for business use. Intel Trusted Execution Technology provides a hardware-based set of extensions that enhance security capabilities, protecting your computer against software-based attacks and protecting the confidentiality and integrity of data stored on your clients’ PCs.

The Intel Core i5-650 is made on a 32nm manufacturing process for better energy efficiency. It uses the LGA1156 socket and is backed by a three-year limited warranty.

This website uses cookies to improve your experience while you navigate through the website. Out of these, the cookies that are categorized as necessary are stored on your browser as they are essential for the working of basic functionalities of the website. We also use third-party cookies that help us analyze and understand how you use this website. These cookies will be stored in your browser only with your consent. You also have the option to opt-out of these cookies. But opting out of some of these cookies may affect your browsing experience.
Necessary Always Enabled

Any cookies that may not be particularly necessary for the website to function and is used specifically to collect user personal data via analytics, ads, other embedded contents are termed as non-necessary cookies. It is mandatory to procure user consent prior to running these cookies on your website.